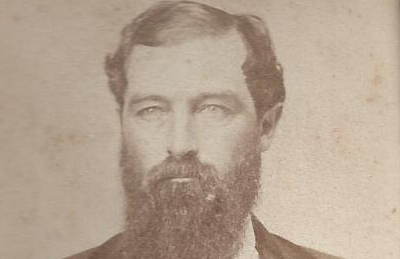 E.R., as he was known, was a powerful and well connected man in Des Moines.  He was a banker, real estate developer and a factory owner.  He was “Sargent of Arms” of the Iowa State Legislature and moved in the highest levels of Iowa politics and society.

But of course all that didn’t happen at once. We know from other sources that Edwin, or Ed. R, or E.R., came to Fort Des Moines as a young man and found work on the river as a ferryman.  But we have not had a lot of details.

If you speak nicely to google, she reveals some references to E.R. Clapp’s early life.

Dr. P. B. Fagan came here with Judge P. M. Casady, with whom he was early associated. He was one of our earliest physicians. They arrived in a buggy
and were ferried across the river by Ed Clapp, then the barefooted, one
suspendered ferryman who announced the fact to his associates as follows:
“Boys I’ve just ferried over two of the starchiest fellows I have ever seen. They
had on black coats, trousers and vests — and if one of ’em didn’t have his boots blacked I’ll be damned.”

A bit later in the same volume, we get this:

The first ice plough was used on the Des Moines river in the winter of 1856. It at-
tracted much attention when Ed Clapp set it to work. It could do more work than
four cross-cut saws operated by four men by hand.

We know from other sources that E.R. started and owned The Des Moines Ice Company, cutting and storing ice from the river.  Later he would install the first industrial refrigerated ice making machine in Des Moines.

Here’s a clip from the book  “Industrial Refrigeration volume 29” published in 1905: 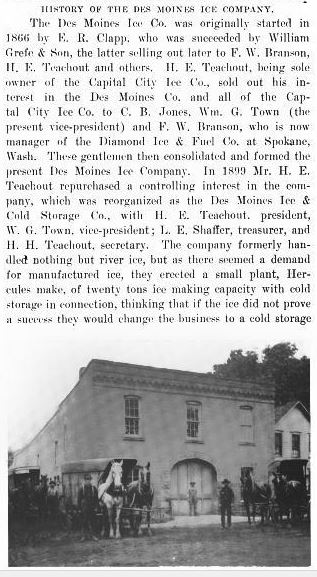 View all posts by lindseydwight

Follow History of the Lindsey and Forster families on WordPress.com